Utah Division of Emergency Management (DEM), Federal Emergency Management Agency (FEMA) Region 8, and local partners have engaged in a multi-year effort to reduce the number of unreinforced masonry (URM) buildings in Utah. Our goal is to help the public understand their earthquake risk and the steps necessary to prepare and protect themselves, their family and their property.

What is a URM?

There are ways to check if a building might be constructed of URM by looking at the building’s exterior.


None of these features alone guarantee that a building is constructed of URM, but they are good signs to spot potential URM buildings.

The Utah State Historic Preservation Office can assist homeowners and communities with the seismic retrofit and repair of historic buildings through Federal and State Historic Tax Credit programs, grants provided under the Certified Local Government program, and the professional technical assistance of their Historical Architect. Preservation Utah also helps find resources to preserve old buildings and homes through a variety of loans and grants. The Salt Lake City Fix the Bricks program provides assistance to Salt Lake City homeowners with the costs of seismic structural improvements to their unreinforced masonry homes.

Utah Division of Emergency Management (DEM), alongside our partners, is working to raise awareness of known or potential URM school buildings, the risks the buildings pose, and pathways towards reinforcing or replacing them. As a part of this effort, a statewide inventory of K-12 public school districts that are believed to have URM buildings is underway. The findings of this report are projected to be available in 2022.

This effort is a continuation of the “Wasatch Front Unreinforced Masonry Risk Reduction Strategy,” released by Utah DEM, the Utah Seismic Safety Commission, the National Earthquake Hazard Reduction Program and FEMA in March 2021. This document provides guidance to Utah communities on how to identify their own risk and take steps to address it. A key recommendation made within the strategy includes the development of an Unreinforced Masonry School Risk Reduction Program. Read the full strategy here.

Visit Be Ready Utah for information on how you as an individual can prepare for earthquakes at home.

It is our responsibility as community members to be aware of the earthquake risk in our region so we can protect ourselves and our loved ones. For more preparedness information on earthquakes in Utah, download any of the following documents on the threat posed by earthquakes in the state and ways to prepare and recover. 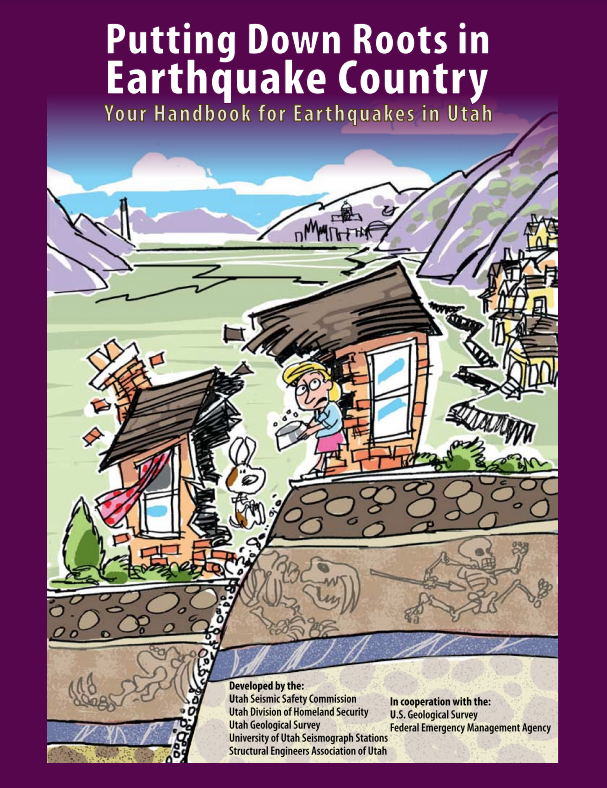 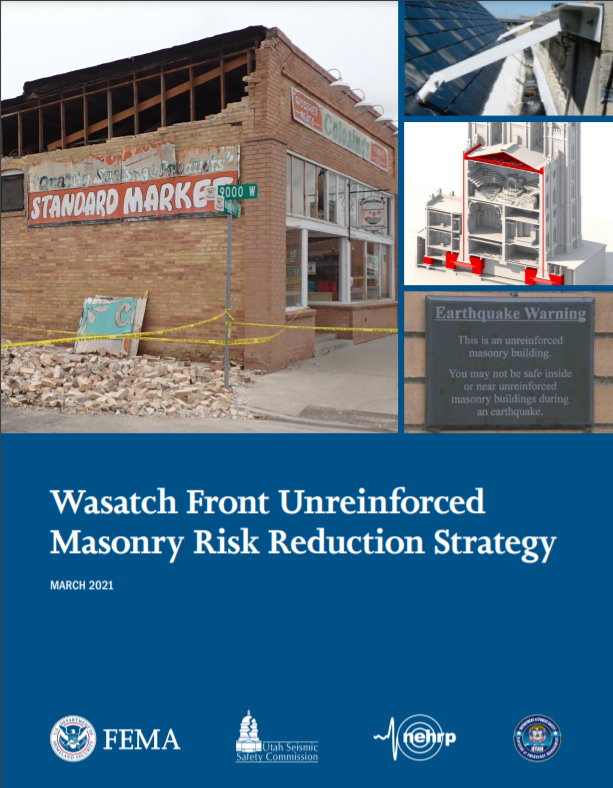 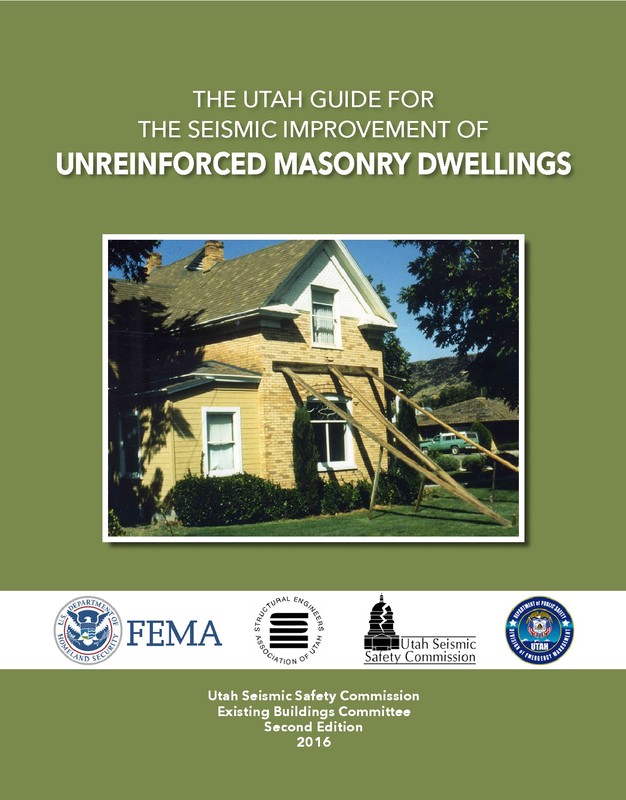 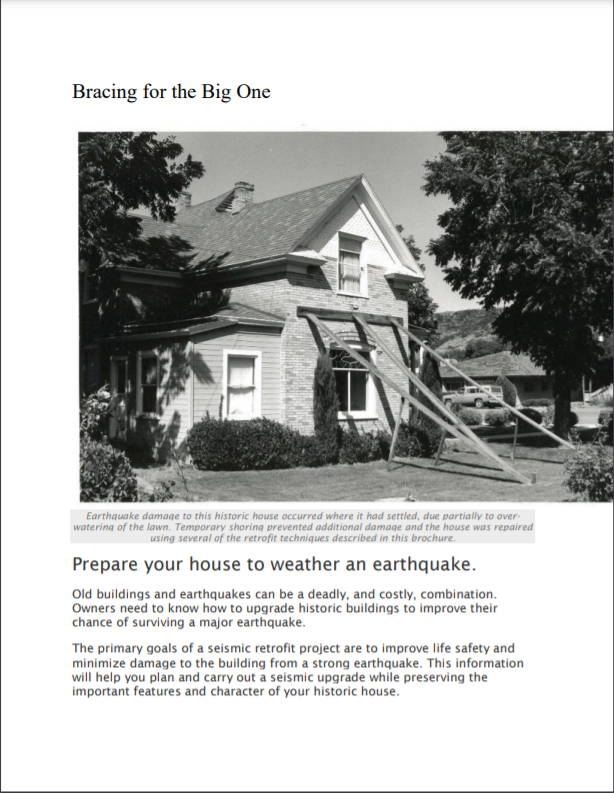 A URM building has brick walls with few or no steel reinforcing bars. During an earthquake, URM buildings are more likely than modern structures to collapse, both inward and outward, and crumble on top of people, cars, sidewalks or structures in and around them. In the 1970s, building codes in Utah were updated to outlaw the construction of new URM buildings. However, thousands of these structures remain, including some schools.

With more than 200 known active faults, Utah is a seismically active state. Naturally, some areas have a greater risk of higher-magnitude earthquakes than others. The Wasatch fault, which extends along the Wasatch Front, is Utah’s most active and hazardous fault.

The Wasatch Front has the potential to be affected by a strong, magnitude 7-7.5 earthquake. Also, many buildings in this region were built before the 1970s, when construction of new URM buildings was prohibited. The combination of these two factors could lead to massive damage during a significant seismic event. Most importantly, this situation puts the safety of those in and around URM buildings at risk.

Those of us who live in areas affected by natural disasters have a responsibility to understand our risk and the steps we can take to lessen it.

The 2020 Magna event was a magnitude 5.7 earthquake. Though it had the potential to cause severe damage, it was considered a moderate event. The Wasatch Front could experience a magnitude 7-7.5 earthquake. If a major earthquake of that size occurs on a central part of the Wasatch fault, Utah should expect potential loss of life and damage costs to exceed billions of dollars in certain counties. URM buildings, because they are particularly vulnerable to ground shaking, are expected to account for 75% of building losses in the event of a magnitude 7-7.5 earthquake. Ground failures, a consequence of shaking that affects the stability of the ground, can lead to major disruption of lifelines (utilities, water, sewer), transportation systems (highways, bridges, airports, railways), and communication systems.

Structures that were not damaged in the 2020 Magna earthquake may still be in great risk during another seismic event. URM buildings are a problem nationwide, and Utah’s 200+ known active faults increase that risk. Utah DEM began its URM initiative prior to the 2020 Magna event; the event underscored the importance of the working group’s efforts.

Living with earthquakes requires preparation. While retrofitted and updated buildings are the most important line of defense, you can take actions that keep yourself and your family safer during an earthquake. Visit Be Ready Utah to learn how to develop your disaster preparedness plan.

At home, you can take actions now to keep yourself and your family safer during an earthquake. Some key actions you can take today include securing heavy objects that have the potential to fall to the floor—pictures, potted plants, furniture, etc. Collect and store key emergency supplies, including water, food, a flashlight, portable radio, medicines and more. Develop a disaster preparedness plan with your family, friends and/or neighbors. Visit Be Ready Utah for more information on how to prepare for an earthquake at home.

At school, administrators can educate staff and faculty on earthquake risk and protocol, hold earthquake drills, and regularly review and update their emergency operations plan. Visit Be Ready Utah’s Be Ready Schools for more information.