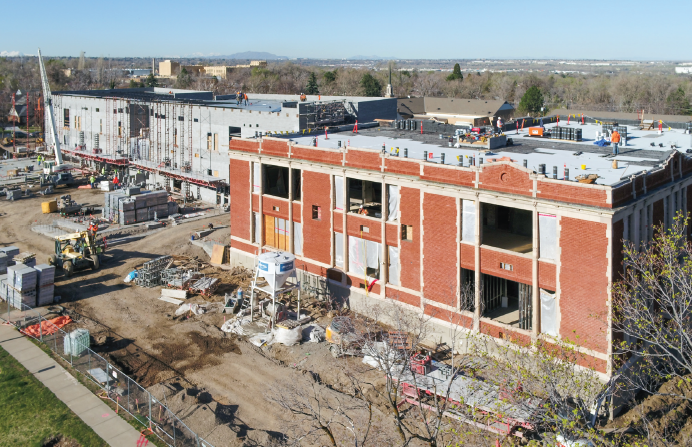 SALT LAKE CITY – Today, FEMA and the Utah Department of Public Safety’s Division of Emergency Management (Utah DEM) released an inventory of unreinforced masonry (URM) school buildings in the state. The inventory has been in development over the past decade to support state efforts to identify URM buildings of all types, which are at greater risk of damage in an earthquake compared to buildings constructed under modern building codes.

While this inventory represents a snapshot in time, it sets the stage for the next decade of important work among federal, state and local government and the communities they serve. This report embodies Utah’s vision for a better, stronger future. That future will happen through an orderly and thoughtful process of replacing or retrofitting URM schools and increasing seismic awareness.

The inventory was completed thanks to the collaboration of all 41 public school districts around the state. Through their coordination, we developed a more accurate and comprehensive inventory. Through their efforts, along with public cooperation, and support from the private sector, the inventory has been gradually reduced and will continue to be reduced over time.

Sixty years ago, about 95 percent of schools were URMs. Today, that number is around 12 percent. This represents dramatic improvements to school safety. It also represents important investments by communities that have voted for bonds to rebuild or retrofit schools to mitigate earthquake damage. Utah should be proud of the progress already made.

Even as recently as Wednesday, we learned that the Alpine School District has completed demolition of the Geneva School. The Provo School District announced that Dixon Middle School is scheduled to be replaced in 2024.

Across Utah, the URM project, conducted over the past decade, identified 119 school campuses statewide with URM construction. Just because a school is on the list, does not mean it is at an imminent risk of collapse. Validating and finalizing the statewide inventory of URM school buildings was the first recommendation and objective in the Wasatch Front Unreinforced Masonry Risk Reduction Strategy, released by FEMA in March 2021.

The inventory will be available for download starting at 11 a.m. on February 10, 2022, at https://earthquakes.utah.gov/unreinforced-masonry/.

What project leaders and partners are saying

“The unreinforced masonry school building inventory has been an ongoing project for several years. Through FEMA’s financial support we have been able to work closely with school districts to complete the inventory and finalize the report,” said Kris Hamlet, director of the Utah Division of Emergency Management. “We believe this transparency will help unite communities and identify resources to eventually fix or replace the remaining buildings and ultimately keep our students safer.”

“It is extremely satisfying to see this report published. It has been a long time coming and represents an important step forward in making Utah more resilient to damage from earthquakes,” said Keith Koper, director of the University of Utah Seismograph Stations Director and chair of Utah Seismic Safety Commission. “The collaboration and unity displayed by state agencies, federal agencies, local school districts, and the private sector in producing this report is admirable.”

“Utah has always built a culture of vision, improvement, preparedness, and resilience. This report is the result of an enormous effort from many people who care about earthquake preparedness,” said John Crofts, Utah Division of Emergency Management Earthquake Program Manager. “It is the first step towards increasing earthquake safety in our schools. We hope that this report will support the continued efforts to preserve life, property, and the environment, and to help Utah become an even stronger, more resilient state.”

What is Unreinforced Masonry?

Unreinforced masonry — construction using brick or block without reinforcing steel or rebar — was common throughout Utah until seismic building codes became more prevalent in the 1970s. Such structures can more easily succumb to the movement and shaking during an earthquake, posing a threat to building occupants as well as individuals outside in close proximity to the structures. There are an estimated 140,000 such structures across the state, which encompass a wide variety of buildings, from individual homes, to businesses, to schools and houses of worship. Modern codes now require masonry construction to include reinforcing steel.

FEMA and the state of Utah recognize the importance of mitigation in reducing exposure to future losses from disasters. The National Mitigation Investment Strategy — published in August 2019 — was developed to help the nation be more intentional about setting resilience and mitigation investment priorities to benefit the whole community. The Wasatch Front Unreinforced Masonry Risk Reduction Strategy was selected as a pilot project for this national effort in recognition of Utah’s acknowledgement of a serious seismic risk and dedication to finding solutions. Both the URM school inventory and the Wasatch Front Unreinforced Masonry Risk Reduction Strategy are available publicly at https://earthquakes.utah.gov/unreinforced-masonry/.

FEMA’s mission is helping people before, during, and after disasters.

Utah Division of Emergency Management’s mission is “To unite the emergency management community and to coordinate the efforts necessary to mitigate, prepare for, respond to, and recover from emergencies, disasters, and catastrophic events.”
Follow us on twitter at https://twitter.com/femaregion8 and https://twitter.com/utahemergency