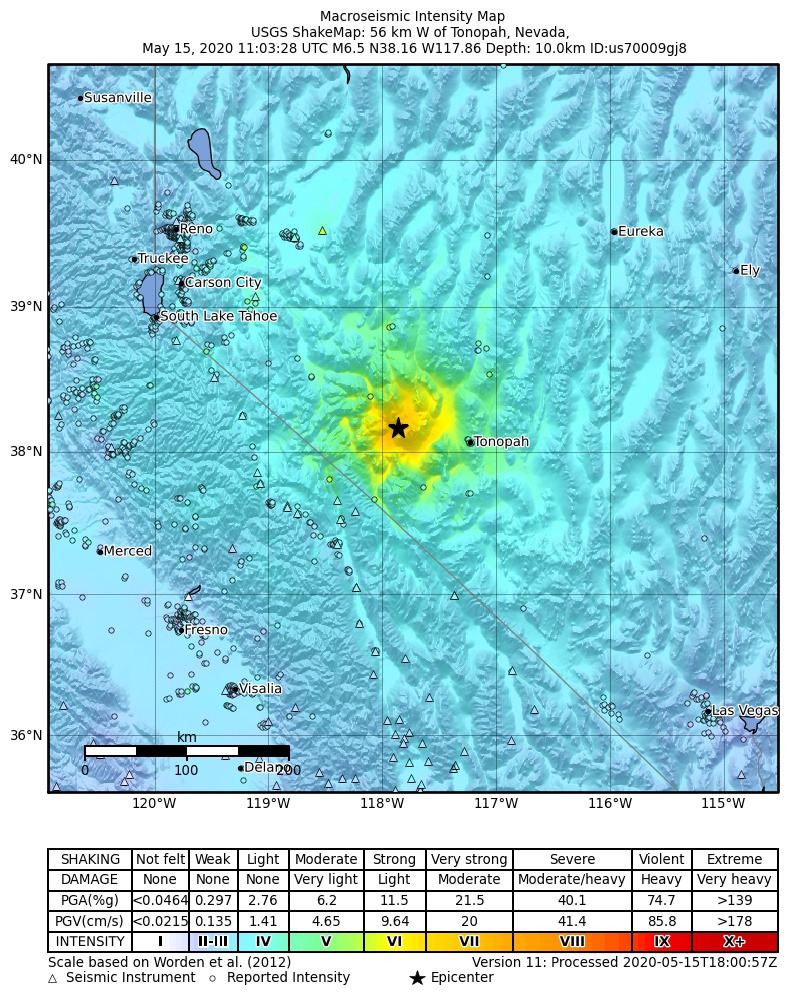 Early Friday morning, at 5:03 a.m. Mountain Daylight Time, Californians and Nevadans were awakened to shaking from a magnitude 6.5 earthquake with an epicenter in the Soda Spring Valley, about 30 miles west of Tonopah, Nevada.

Though the most intense shaking was felt in Nevada and California, a handful of Utahns reported feeling light shaking as well — 300 to 350 miles away from the epicenter.

The earthquake in Nevada will not cause an earthquake in Utah or affect earthquake activity here, but intense shaking there will generate thousands of aftershocks for the area around Tonopah. Already, the area has had at least 7 aftershocks above a magnitude 4.5.

The shakemap is a tool that the U.S. Geological Survey generates about 10 minutes after a sizeable earthquake. It shows how intense an earthquake was felt for various areas by using the Modified Mercalli Scale of intensity. Intensity tells a better story than magnitude. Check out the shakemap below.

We love when seismologist Dr. Lucy Jones weighs in with her descriptions of earthquake activity. It helps that she’s active on Twitter. In tweets earlier today, she referenced the magnitude 6.5 quake in Idaho that happened on March 31, the day this website went live.

Utah seismologists weigh in, too

In a series of tweets today, the University of Utah Seismograph Stations explained some more:

Although it may feel unsettling that the western US has seen several medium to large earthquakes recently (Magna, Idaho, Nevada), we have no reason to think these earthquakes are related. They all occurred in seismically active areas.

It’s just another reminder that we need to prepare. Start preparing your family or business by downloading this awesome guide created by earthquake partners in Utah: Putting Down Roots in Earthquake Country

Joe Dougherty is the public affairs director for the Utah Department of Public Safety. This post was written with help from the U of U Seismograph Stations.