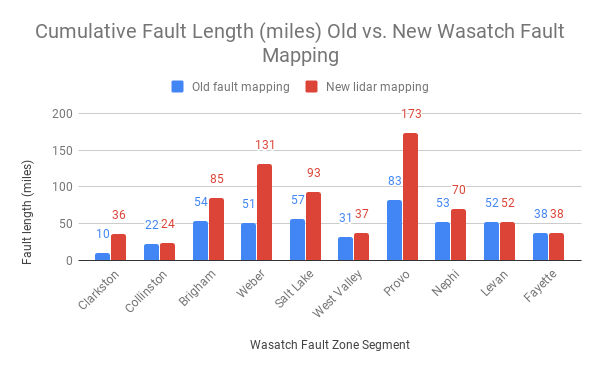 Thanks to a 4-year effort by the Utah Geological Survey, Utah now has a better look at Wasatch Front faults from southern Idaho to central Utah

The overall length of the Wasatch fault, 240 miles, has not changed, but details to the existing faults have been added to the library. We now have 739 mapped miles of fault strands, compared with a previous total of 451 miles for the same area.

This information can be used in areas that are being rapidly developed or are in areas previously lacking detailed fault mapping. Newly special study zones will allow cities to know what areas need further study before development takes place.

While the study’s increased accuracy and detail helps to pin down fault locations, it is not precise enough to safely locate specific buildings on individual lots.

The study used lidar sensors mounted to airplanes, which flew over the Wasatch fault zone and other faults along the Wasatch Front. Lidar is like radar, but uses lasers to do detailed land mapping while removing details like buildings and trees. Compare the high resolution image of the faults with a standard piece of aerial photography.

It’s kind of like our human circulatory system. The circulatory system includes large arteries and smaller veins. Yet it’s one system. Because of this research, we have now been able to zoom in more closely on smaller sections of the [Wasatch Front] fault systems, which significantly improves our understanding of the entire zone.”

Nathan Schwebach, spokesman for the Department of Natural Resources.

Details like this will let geologists decide where to do deeper investigations into earthquake history in Utah. When we say deeper, we mean they can choose sites to actually dig a trench across certain faults to measure how the earth has moved over centuries or longer.

As a result of this research, we better understand where we’ve had surface-rupturing earthquakes in the geologic past, and where we may have them in the future. Knowing where fault scarps are present helps us make better land use decisions now and in the future.”

In this case, the lidar map shows a promising spot for trenching near the Springville Fish Hatchery along the Provo segment of the Wasatch fault zone. It looks like a good site because the scarp (land that broke or moved during previous earthquakes) hasn’t been disturbed by development.

If you’re like us and geek out about earthquake science (and we know some of you are now 😉), check out the full report and cheer them on, because science is our friend.

Fault trace mapping is currently available in an interactive map on the UGS website at https://geology.utah.gov/apps/qfaults/index.html. Special study zone delineations and the fault mapping will both be available through a soon-to-be-launched UGS hazards app that is currently in beta testing.

Joe Dougherty is the public affairs director for the Utah Department of Public Safety. jdougherty@utah.gov