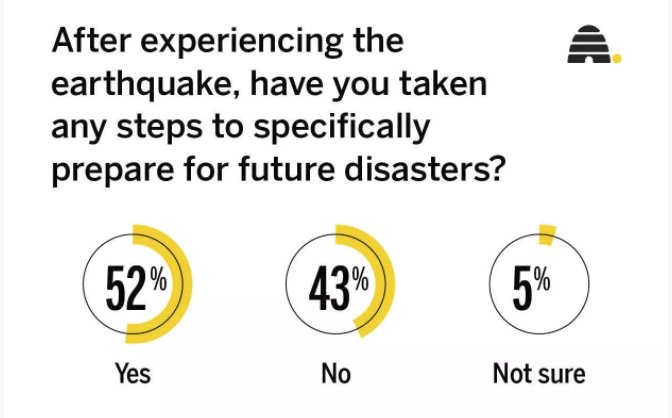 2 months ago today, northern Utah was shaken by the largest quake in the Beehive State in a generation.

Can you believe it? More than 2,000 aftershocks later, Utah is recovering from the magnitude 5.7 earthquake that woke us up at 7:09 a.m.

That earthquake, the largest in Utah since a 5.9 quake in 1992, was another reminder that Utah is earthquake country.

Last week, the Utah Division of Emergency Management asked its Twitter followers in English and Spanish how they have been doing since March.

Of course, this isn’t a scientific poll, but it’s interesting:

Some of the replies were more telling than the results

Following the earthquake, there were many felt aftershocks, 6 of which were above a magnitude 4. Even though this was normal in terms of earthquake activity, it wasn’t normal for so many people who hadn’t experienced even a small earthquake before.

Our state agencies heard from so many people who began to feel phantom earthquakes, lost sleep and dealt with struggling and fearful family members.

Our hearts went out to everyone who felt lingering fears and anxiety. So we reached out to you this way:

DEM used that tweet thread to acknowledge that anxiety was a normal reaction to a stressful event. They promised that the following things would help ease anxiety:

Fortunately, we’re hearing that it’s working, Utah. The more people know about earthquakes, the better they can respond. As time passes, the feelings of anxiety start to fade, but we can’t give up once we get to a feeling of comfort.

The Deseret News learned through a recent poll that many Utahns didn’t feel prepared for the earthquake. But many began taking action. 52 percent of their poll respondents began taking action to prepare themselves for future emergencies.

The earthquake was a wakeup call. Have you responded?

Now that you have lived through this experience, you have something no one can take away from you: knowledge.

Here are 5 things you can do to get ready for the next earthquake.

Want to learn more? Head over to our friends at BeReadyUtah.gov to get up to speed.

We’ve been dealing with a lot

But we will continue to get through the pandemic and the earthquake recovery together. Remember to be kind and don’t lose focus on preparing for the future.

Joe Dougherty is the director of public affairs for the Utah Department of Public Safety. jdougherty@utah.gov